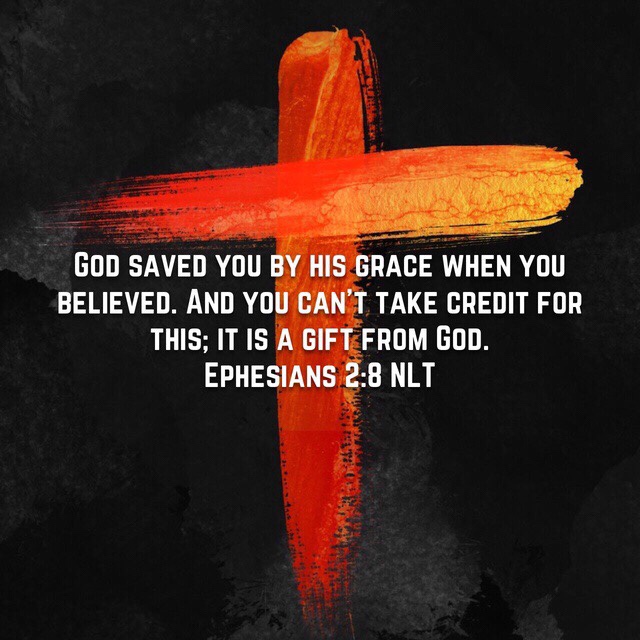 I’m stuck here.  I believe the time is short and I want you to know of this beautiful gift from a loving Father who doesn’t want you to perish!

There’s so many good things I’m coming across in the Bible.  Did you know, reading the Bible is like talking with God?  It is! I get something new every time I read.  He speaks to us through His word.  I guess that’s why there’s a passage that says:

For the word of God is living and powerful, and sharper than any two-edged sword, piercing even to the division of soul and spirit, and of joints and marrow, and is a discerner of the thoughts and intents of the heart. (Hebrews 4:12)

Anyway, back to salvation…the Bible, in Ephesians 2:8, says this (The underlines and other markings are mine): God saved (you) by His grace when (you) believed.  There’s a whole lot to look at in just that one sentence!  The rest of verse 2:8 actually says that you can’t take credit for it; it is a gift from God. But we’re just looking at the first sentence for this post.

God saved you. That sounds like past tense to me…are you saved?  If you don’t know the answer to that question, you may not be, so it’s time you thought about it.

So, how’s He do that?  How does He save us?  BY HIS GRACE!  He made a choice out of His goodness to give us the gift of salvation though His Son’s death on a cross.  That gift is available to anyone who then chooses to believe!  (This part is hard for some people to wrap their heads around…a gift is a gift.  A giver gives a gift not expecting anything in return.  The gift is free.  It was bought and paid for, in full, by the precious blood of the spotless lamb of God: Jesus Christ.

So, okay…when did He save you?  I personally don’t remember the exact date that He saved me.  I know the year was 2013 and I was 47 almost 48years old…I think it was in December when I finally realized that’s what had taken place.  One morning I woke up and just knew that I knew that I knew.  Jesus had saved me the night I cried out to Him and surrendered my will to His.  The night I wanted to die.  In a way, I guess I did. I surrendered to Him.  It just took me a few months to come to the realization…to finally BELIEVE it to be true. Same goes for you.  He saved you WHEN you believed!  Have you believed yet?

Believed what?  In Jesus?  Yes, of course…but it goes deeper than just believing inJesus.  I believed in Jesus since I was a little girl.  But I believed based on what my parents told me and what my family “believed”…but I wasn’t saved.  How do I know that?  Because when He did save me, I knew it!  Fruit started being produced in my life…my thoughts changed, my desires changed, my actions changed…(He’s still working on me but I know my salvation is secure!).

SALVATION IS FOLLOWED BY CHANGE

So what do you have to do to be saved?  You have to believe in Jesus and that includes believing that Jesus is who He says He is and did what He said He did…when you believed He saved you!  If you choose to believe you will be saved.  It’s another one of those beautiful promises in the Bible. Isn’t that amazing?  If you aren’t already saved, you should be having a (mind-blown) 🤯 moment right now!  THIS is the Good News of the Gospel.  Just believe and surrender your will to His.  Trust me, His is much better than anything you’re trying to do on your own.  It is!  Your will is what keeps you stuck.  Don’t pass up on the best gift you could ever get…the gift of salvation.

I always thought I was a Christian before.  I thought that my Catholic upbringing “secured” my Christianity.  I never knew anything about being saved and I never had a change of heart.  I went through the motions.  I did all the “things”…confession to a priest (frequently…because I kept living my very sinful life) mass, sending my son to Catholic school…I did lots of things as an adult trying to earn God’s approval (more fuel for future posts).  I was trying so desperately to please Him, but my heart was not changed.  He was not Lord of my life.

I know beyond a shadow of a doubt that He saved me.  I know because of the fruit in my life…my desires have changed.  I want to be closer to Him, I want others to know the grace of God.  I never used to care one way or the other…never really gave it much thought.  And now, it’s all I think about.  How to help others come to this truth.  Father, let Your words take root in the hearts of those who read  this post tonight and let this bring glory to you Father by the fruit Your words will produce in their lives.  Amen and Amen!

This site uses Akismet to reduce spam. Learn how your comment data is processed.